I started out all gung-ho. I was ready to start training. I had given up on Cinch (it made me GAIN weight.. don't get me started. I created an 8 week half-marathon training schedule, and was rocking it out. On Day 7, I set a goal of doing 15 minute miles.

I think Day 7 or 8 was when I actually quit training. I started writing articles, and got busy, so training went on the back burner. Well, I guess I can't call it the back burner so much as completely left the stove – and the house. Life got in the way. Training stopped.

I knew the half-marathon was coming up in like 6 weeks, but I just couldn't. Get. Back. On. Track. 4 weeks to go, and I still did nothing. 1 week left, and I was like well shit, I haven't trained yet, so if I start now I might be too sore to finish the race! I headed to the running store and grabbed a kick-ass pair of shoes, and some running socks, and I found an awesome sports bra at Goodwill.

I was as ready as I was going to be.

I couldn't sleep the evening before the half-marathon. I was so nervous, I thought I was going to puke. After snoozing for a few hours, it was time to wake up. I had to be downtown at 6am, and was taking the Metrolink, so I woke up at 4AM. A..M.. that means in. the. freakin. morning. 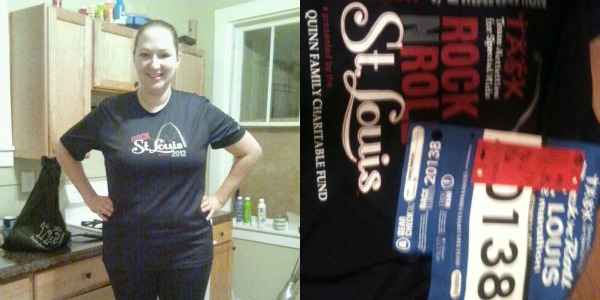 Rise and shine! Up and at em! Okay, not quite, but I headed out the door.

See, the sun wasn't even up yet! Geez. What was I thinking? 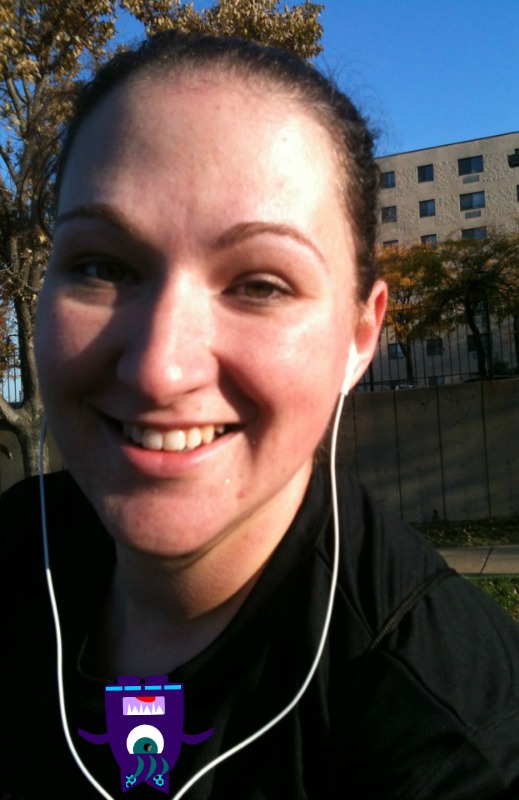 Mile 3 and I was smiling. Barely. That is about when a dull ache started in my knee. I knew I could do it, 3 miles down, 10 miles to go. I've got this. 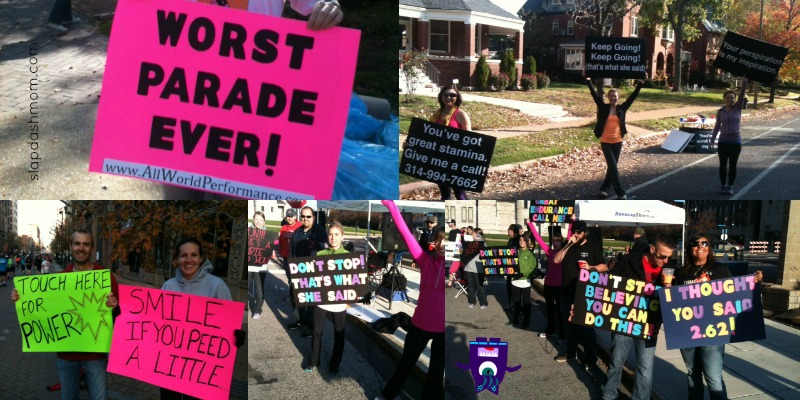 The funny signs kept us occupied for a while. My favorites were the ones that had “that's what she said” written on them. :) OH and one said “smile if you peed a little”… cracked me up! It was nice to see all of the support out there, every mile there was something new to look at.

I hit 6 miles and was still feeling alright. I think it was mile 8 when the doubt started to kick in. At this point I was very sore. My knees hurt, my back was like “what are you doing to me?!” and my mind was exhausted. I really should have worked on creating a good playlist just for the half-marathon, because the music I had was the same ol' same ol' that I had been listening to for months during workouts. Big mistake. I couldn't even listen to the music, because it just got on my nerves. So I completed the entire race without any music! It was torture.

Miles 9 and 10 were pretty much hell. I mean, I tried really hard to run – or even jog – but I couldn't. At all. My legs wouldn't move, my feet felt like they weighed 50 pounds a piece, and they just would not leave the ground. I felt as if I was almost scooting. Oh god, it was so bad! 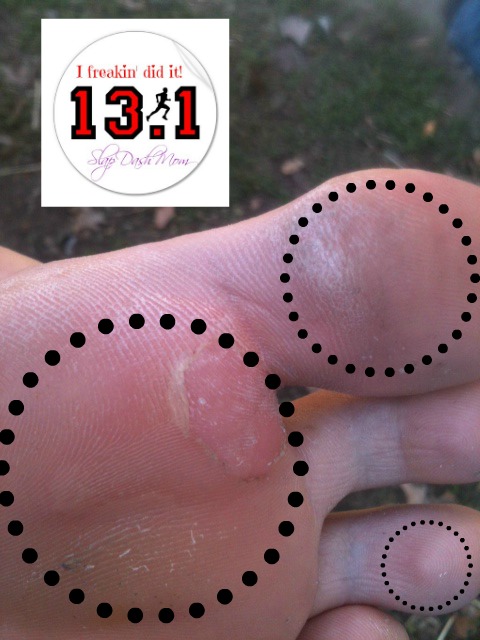 Mile 10 is when I started to feel the blisters squish, squish, squish. Ouch. Ouch. Ouch. I'll spare you the photos of what my foot looked like for the next week. I also lost a toenail. Yep, that's right… lost a toenail! I bought my shoes a 1/2 size bigger, and trimmed my toenails down, JUST so that wouldn't happen, but a few days after the race I could tell the toenail was just dead. I went to clip it and the whole thing came off! A month later and it's still not back. 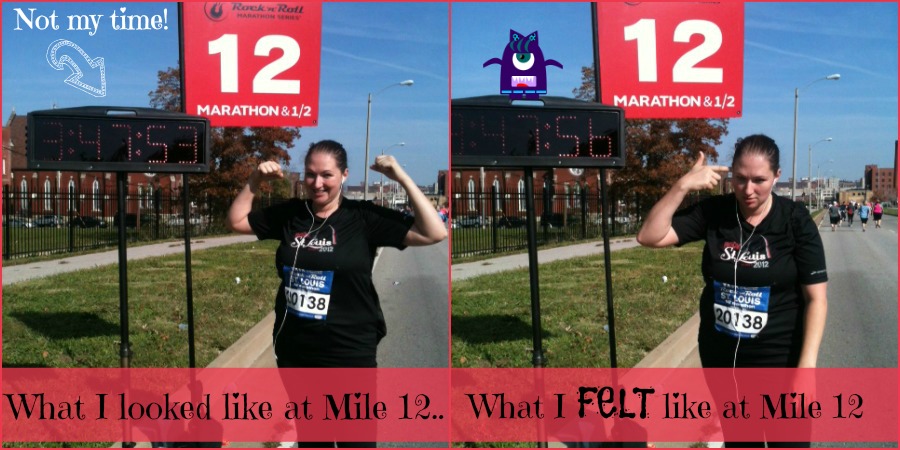 At Mile 12 I had all but given up. Truth be told, if it was possible to give up at Mile 12, I would have. But it really wasn't… because how the hell do you stop walking when there's a mile left to go? You have to get back to your car, family, etc somehow! You have to walk there! So at this point I was like what the hell, I'm finishing this stupid race!! 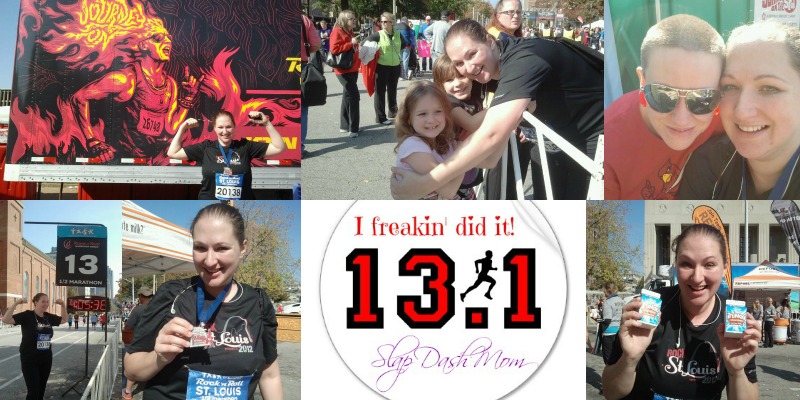 I knew my girlfriend, mom, and kids were at the finish line. They were waiting for me, so I couldn't just give up. I couldn't quit. At mile 12 I was almost in tears because of the pain, the mental exhaustion, just everything. It was so hard. When I finished, I swore I'd never do anything like that EVER, ever again. My finish time was 3 hours 45 minutes. My goal was to finish in under 4 hours, so I barely made it!!

If I can do it, anyone can.

For me, most of the race was mental. Once the doubt set in, it was nearly impossible for me to move. The power of positive thinking is amazing, and is the ONLY thing that helped me finish. I knew it was NOT my physical ability that did it!!

Here I am a month later and I set a goal for doing a FULL marathon next year. Going through these pictures and writing this post makes me second guess that decision, but I'm going for it. I'm jealous of the 26.2 stickers! Mine only says 13.1. And to think, I'm going to torture myself like that over a damn sticker… :)

Have you ever done a half-marathon? What about a full marathon? How did it go?

**I do not recommend attempting a half-marathon without training first!!!