Home / Health & Wellness / What is Thieves Oil and How Do I Use It? 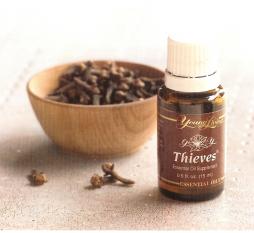 I had never heard of thieves oil until our chiropractor used it to help with Sapphire's ear ache. She said it works better when used at the first sign of sickness, but she rubbed it into her feet for good measure anyway.

The story behind thieves oil

This is just a story passed on to us by our chiro, so the validity of it is uncertain, but it's still a fun tale nonetheless. Back in the days of the Bubonic Plague, thieves would sneak into people's houses to steal their jewelry and other items. To prevent themselves from getting sick, they would put this mixture of oils on their chest and face. It became known as thieves oil for this reason.

From Amazon: Thieves oil was created based on research about four thieves in France who protected themselves with cloves, rosemary, and other aromatics while robbing plague victims. The proprietary Thieves oil blend was university tested and found to be highly effective in supporting the immune system and good health.

Packed with powerful, germ-killing essential oils, thieves oil helps eliminate airborne bacteria and boost the immune system. Thieves oil offers protection during cold and flu season, but are best used before the sickness occurs. Thieves oil offers a safe, all natural, and powerful approach in the battle against germs.

Where to purchase thieves oil

Homeopathic and health stores should have thieves oil, but if you order online it will likely be cheaper. I ordered my thieves oil

on Amazon for about $40, but there is a Germ Fighter

that is under $10 that is supposed to be comparable.

Make your own thieves oil

Put a tablespoon of each in a 2 ounce bottle: eucalyptus, rosemary, cinnamon, clove and lemon. Fill the rest with olive oil.

As I said before, we used this for Saff's ear ache and it helped tremendously, but it's best used as a preventative measure. I personally don't like the scent of cloves, but I think thieves oil smells great. Use thieves oil to keep colds and flu away. Thieves oil is said to help wounds heal, even in animals. Rub thieves oil on the bottom of their paws to keep them from getting sick when they are visiting other dogs (or the vet's office). You can also use it as a diffuser in your home or office, to ward off germs.

Do not put thieves oil on or near your mouth. When using thieves oil, rubbing it on the feet is best. For adults and older children, you can rub it on the chest (like you would with any vapor rub). Thieves oil is not recommended for use on babies. I've been told that those with sensitive skin should dilute thieves oil with almond oil before applying it to their skin. As with anything, test your skin on a small area first. I've used thieves oil on everyone in the family, and none of us have had any issues.