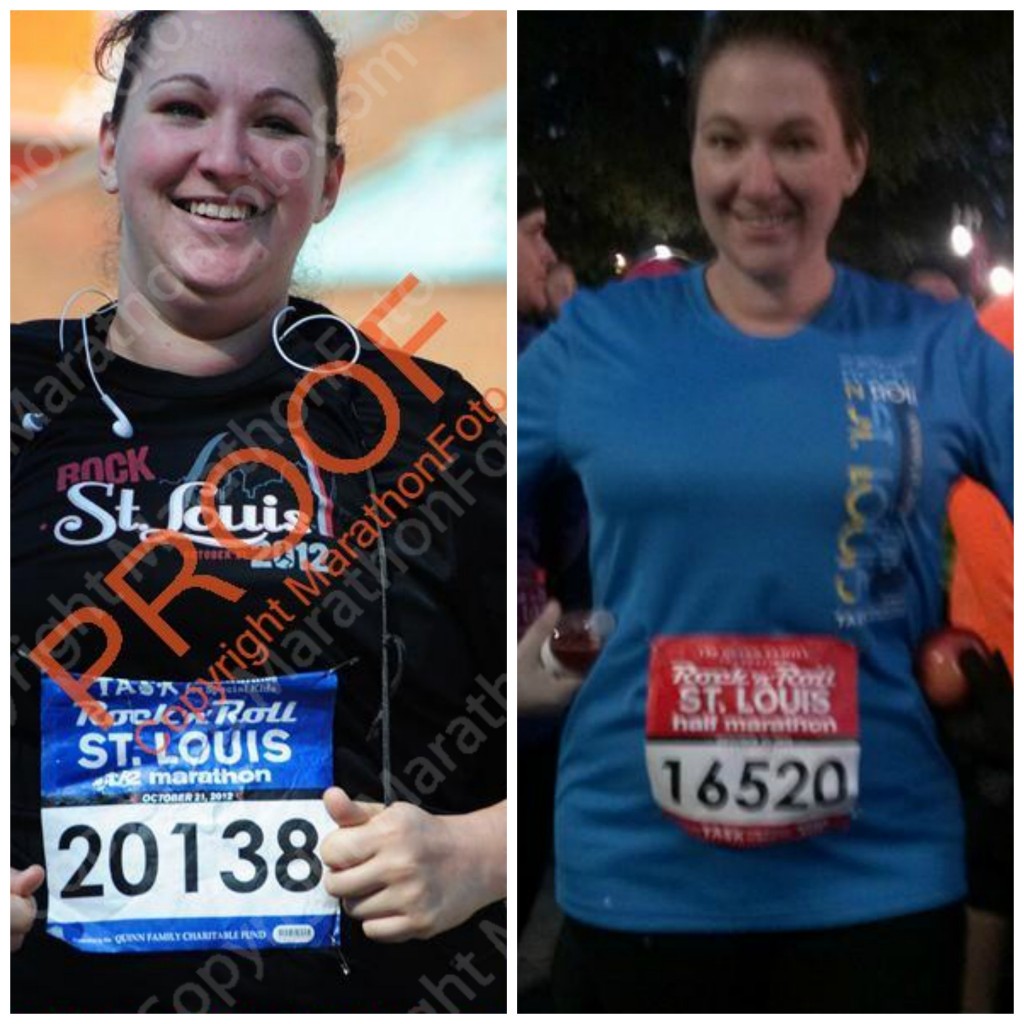 However, this year is a different story. As you can see by the photo above, I look a liiiittle different this year. I've lost a few pounds. Completing a half-marathon gives you a feeling of bad assness that you don't get from much else. Except maybe child birth.. that made me feel pretty bad ass.

If you have your eyes set on a half-marathon, then do one! Here are a few tips I've compiled based on the two halves I've completed.

This year was MUCH easier than last year, but was still difficult. I had little faith in myself and actually ended up finishing at 3:01:30 because I kept stopping to take photos… because I figured I was already at 3:30 or so, so why rush now? If I had just kept going instead of losing faith in myself, I would've finished in under 3 hours!

First tip: have faith in yourself. Push as hard as you possibly can, and just worry about finishing. Don't focus on how far you have left, focus on how far you've made it! By mile 8, I was starting to wear down a little bit. It took a while to get to mile 9. Then I realized… holy shit, I've finished 9 miles!! That means I only have 4 miles to go?! WHAT?! Power boost!

Second tip: Just enjoy it. Take in the scenery. Appreciate the uphills, because that means you'll have a downhill. Read the signs – give high fives – take photos (quickly!) – just take it all in.

Third tip: Earn your walk. If you're doing a walk/jog combo, don't get comfortable and walk the entire time. If that's how you plan on doing it, that's totally fine – but don't show up and then half-ass it. During your jog, when you feel like stopping, don't. Jog a few more steps, or a few more seconds. “Earn your walk, bitch” was my mantra the entire race! I made myself EARN it every time I wanted to walk.

Fourth tip: Focus. Focus on your race. Don't compare yourself to those that are passing you. It's a race, but you're only racing yourself.

Fifth Tip: If you get tired, look behind you. You'll see how many others you're ahead of, and it might just give you a boost. I know I said not to worry about everyone else, but to see hundreds (or thousands) of people behind you will give you an instant pick-me-up.

Sixth Tip: Find inspiration. If you don't have inspiration deep inside you, find it somewhere else. I think it was around Mile 5 when we had a huge freaking hill to climb. I was feeling like I couldn't jog up it, no matter how hard I tried. Then I saw a woman with no legs, pushing herself up the hill in her wheelchair. She was going at a snail's pace because the hill was steep, and it was difficult to walk up much less push yourself up… at that very moment, I decided I was not going to complain about my aching knees, thighs, ankles, hips, feet, or whatever else bothered me. No matter how bad the pain got, I was going to be thankful that I had legs and I could feel the pain.

Seventh Tip: Keep your eye on the prize(s). There are many fun things that take place after you complete your race, but most likely you're going to be so dead to the world that you won't care. So, keep your eye on the prize… what are you doing afterwards that you're looking forward to? I was looking forward to crossing the finish line and hugging Rachel… and drinking a chocolate milk.

Eighth Tip: Last but not least, make sure you're prepared. Everyone always covers this tip, so I left it for last. Get the right shoes, find the right training plan, and practice your butt off – whether it's at the gym or on the pavement, any type of activity will prepare you better than not doing anything at all. I only trained by jogging/walking a few miles, but I spent at least an hour a day at the gym – kicking my own ass – and it helped so much. Oh and one more thing, get good socks! Mine cost $15 but were worth every. single. penny.

Do you have any tips? Share them in the comments!!