Home / Travel / How to Survive an Unexpected Road Trip

As most of you know, my Mom and I took an impromptu road trip to Utah to pick up three dogs for a shelter she volunteered at. On our way there, we broke down. It was 2AM, and we were 20 minutes outside of Las Vegas, on the outskirts of Boulder City. Mom's SUV literally just stopped driving. We coasted into a little parking lot in front of Chilly Jilly'z – an adorable little cafe with tons of breakfast, lunch, and dinner options – as well as desserts!

The reason I mentioned Chilly Jilly'z is because the staff there really made our trip better. They gave us the number of an amazing mechanic in town. So even though the entire transmission needed to be rebuilt, and even though we were approaching a holiday weekend, he charged us about half of what others would have!

We stayed at a hotel that had literally nothing within walking distance, so we had to eat their food from the cafe. It was pretty gross, especially after days 2, 3, and 4! One thing that would have made our trip much better? GOOD FOOD! So, let's talk about preparing food for a road trip. I'm not talking ziploc bags full of soggy fruit or cheese, I'm talking … the good stuff.

How to Survive an Unexpected Road Trip

The key to surviving any road trip is patience. Nothing ever goes as planned, so when something ends up going haywire, just take a step back and breathe! When we broke down, my Mom started freaking out (of course). I couldn't freak out, too, so I told her to calm down. She walked across the street to the gas station to see if we could get a taxi to a hotel. I mean, what else were we going to do?! Come to find out, taxis don't service that area, but an elderly gentleman at the gas station gave us a ride up the road to a hotel.

We could have both totally freaked out when it all happened, but because at least one of use remained calm, we got a good night's sleep and were able to wake up the next morning – rested – to tackle the issue at hand.

A plan never hurts! I'm a huge planner, so as soon as we woke up, I started making a plan. What if the SUV wasn't fixed today? We still needed to pick the dogs up, so I had Mom start texting everyone involved in the rescue of the dogs, to let them know what was going on. Sometimes, though, no matter how much you plan… you can't plan for everything. The mechanic started working on the car on Wednesday, and thought it would be done Thursday, but it wasn't done until Friday around noon. Because I had already figured out all of the “worst case scenarios” I could, the SUV not being done was fine – it wasn't something we were freaking out about.

Food makes everything better. We ate at the cafe downstairs in the hotel a few times, and then we ordered pizza (cold pizza for breakfast was better than the cafe food!). Whether you plan easy 5 ingredient dinners at home, or you're used to using breakfast hacks to get the kids out the door in the morning, you know food. We all know food! And you NEED FOOD if you're going to survive this road trip!

Some of my road trip favorites include:

Make the most of it! Even if your road trip has been an absolute disaster, you've gotta make the most of it! I started posting pictures, hashtagging #VacationNotVacation. I was GOING to make some memories with my Mom, no matter what. 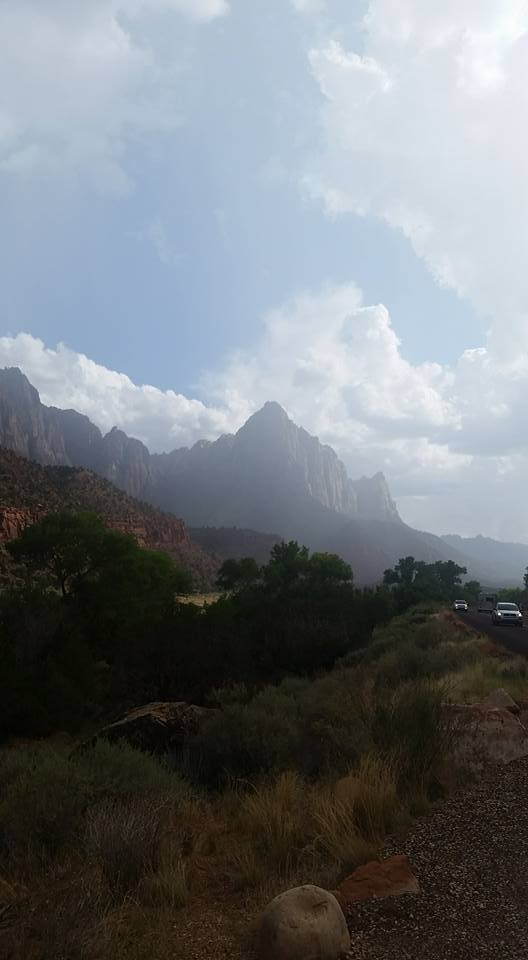 After we got on the road, we went to pick the dogs up. After that, we drove through Zion National Park – something we never would have done otherwise! And here are some photos from the rest of our trip… 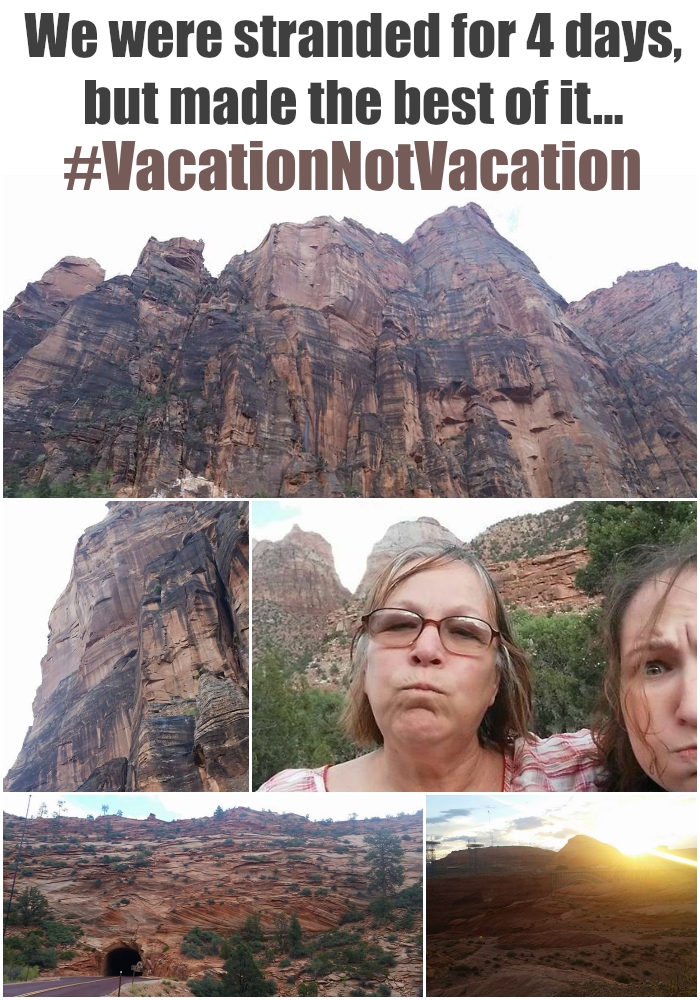 Previous Post: « 5 Creative Play Ideas – at the Park with Bobs & LoLo and Dirty Feet
Next Post: Expectations VS Reality: My Week as a Stay at Home Mom »