I love these corpse flower facts because, well, what other kind of plant sounds like it belongs in a funeral home? Have you watched the Dennis the Menace movie where Mr. Wilson has this flower for like 40 years, and they all gather around to watch it bloom (finally!) and Dennis does something crazy and makes them miss THAT moment? That is a corpse flower!

While the movie makes it a bit dramatic, the corpse flower does only bloom a few times in its entire 40 year life span, and it's a very rare occurrence to see in person. 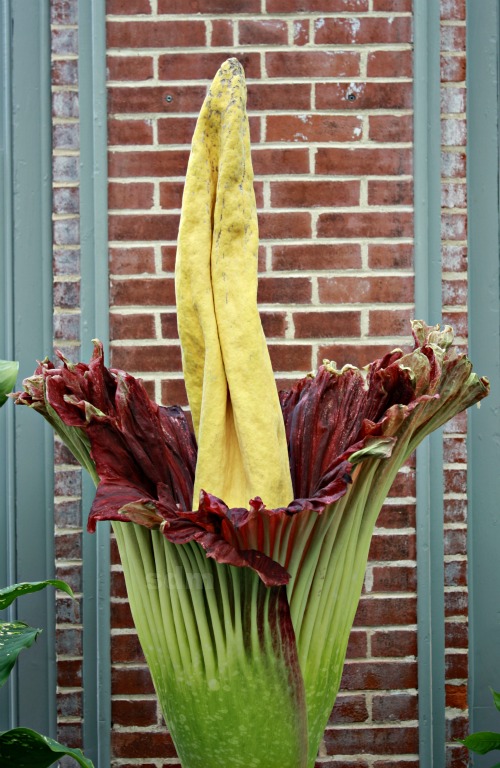 We had the privilege of seeing the corpse flower in bloom today at the Missouri Botanical Gardens in St. Louis, Missouri. We are fortunate enough to live about 2 miles from the Botanical Gardens, so we go fairly often. Everyone's been talking about the possibility of the corpse flower blooming this weekend, but nobody knew for sure when it would happen. The bloom only lasts for about 2 days, but when it first blooms, it emits this odor that smells like rotten eggs or a dead body (which is where it got its name). Unfortunately, the corpse flower bloomed last night, so when we arrived at 9AM, the stench was almost gone. It smelled a little odd, but nothing like you'd imagine. 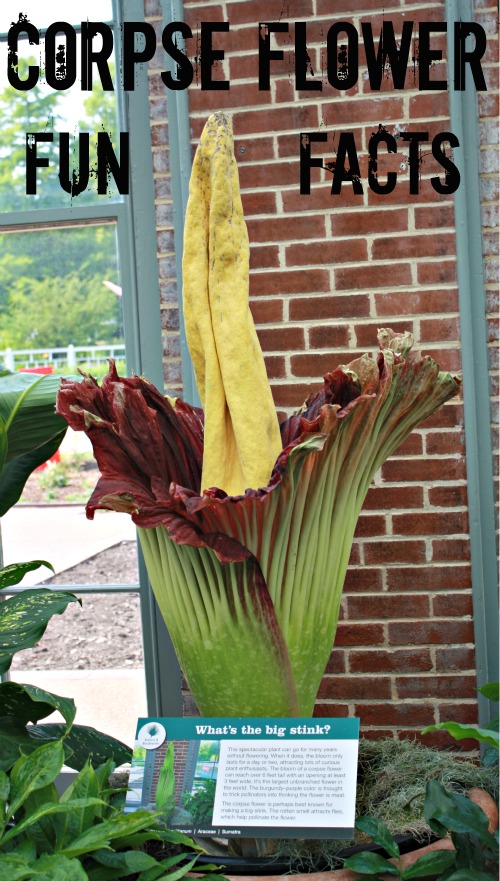 The titan arum is a flower that is both exotic and beautiful. Its official (formal) name, Amorphophallus titanum, is Greek. It can be broken down into three parts: amorphos (misshapen, without form), phallos (penis), and titan (giant). The name titan arum was made up when this flower was featured on a television series, and they thought its real name was a bit too risque for daytime television.

This amazing flower is green on the outside and deep red inside, giving it the appearance of rotting meat.

The spiked center part of the flower, the spadix, is hollow and topped with an abundance of pollen. When the corpse flower is in bloom, the spadix gets as warm as a living human body. The heat is thought to boost the scent of the flower. 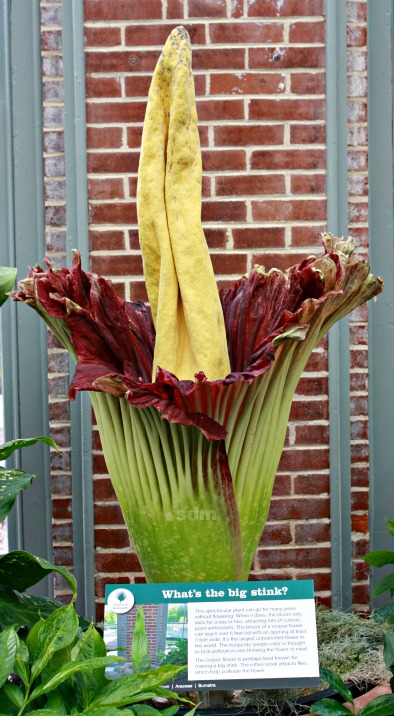 Still need more corpse flower facts? You got it!

The corpse flower can reach over 10 feet high, and in full bloom can be up to 6 feet wide! We will be going back tomorrow to see it in full bloom, as its reach isn't quite to 6 feet yet.

This plant is so rare and exotic that when it blooms, it makes headlines around the world! Many avid gardeners consider the sight a once-in-a-lifetime experience, and we got to capture it today!

Download your Free Corpse Flower Facts Worksheet. Save it and edit it online, or print it.

Previous Post: « 13 Quick Healthy Ways to Lose Weight Fast
Next Post: What is Thieves Oil and How Do I Use It? »